5 of the Best Forests of British Columbia to Explore

British Columbia is well known for its forests as well as its forestry industry, and during a trip here it’s always possible to find a beautiful patch of woodland or wild forest to immerse yourself in – perfect for a spot of forest bathing, or a simple stroll. 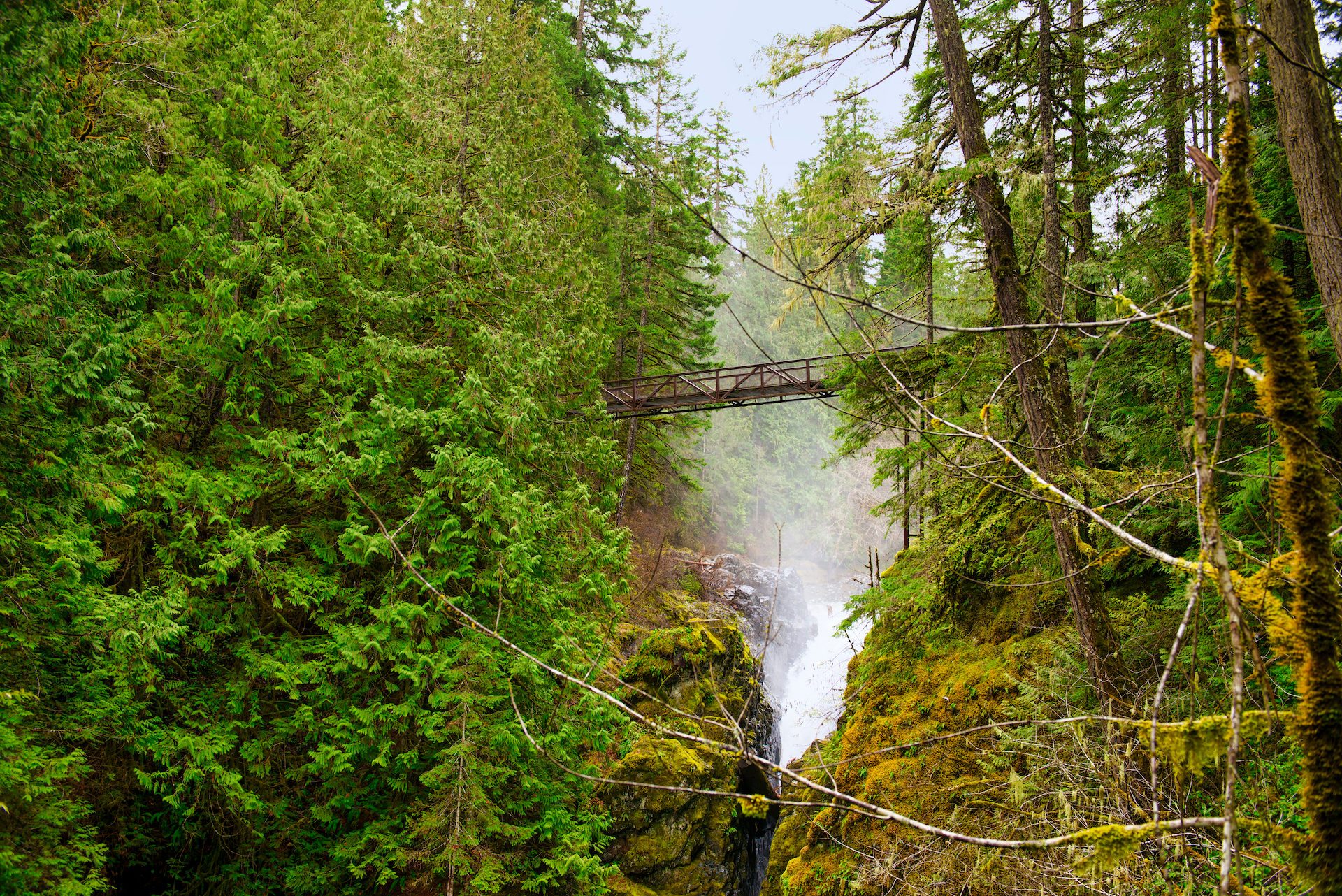 View of the bridge over Englishman River upper waterfalls section located in Vancouver Island, BC Canada

The forests in British Columbia range from dry pine forests to wet, temperate rainforests thanks to the huge geographical, geological and climatic variance within the region. Up to two thirds of British Columbia are covered in forest, with 98% of it having been awarded the Sustainable forest management certification.

If you love being surrounded by trees and nature, you’ll love spending time in British Columbia. Here are some of our favourite places to experience the diversity of forests in BC. 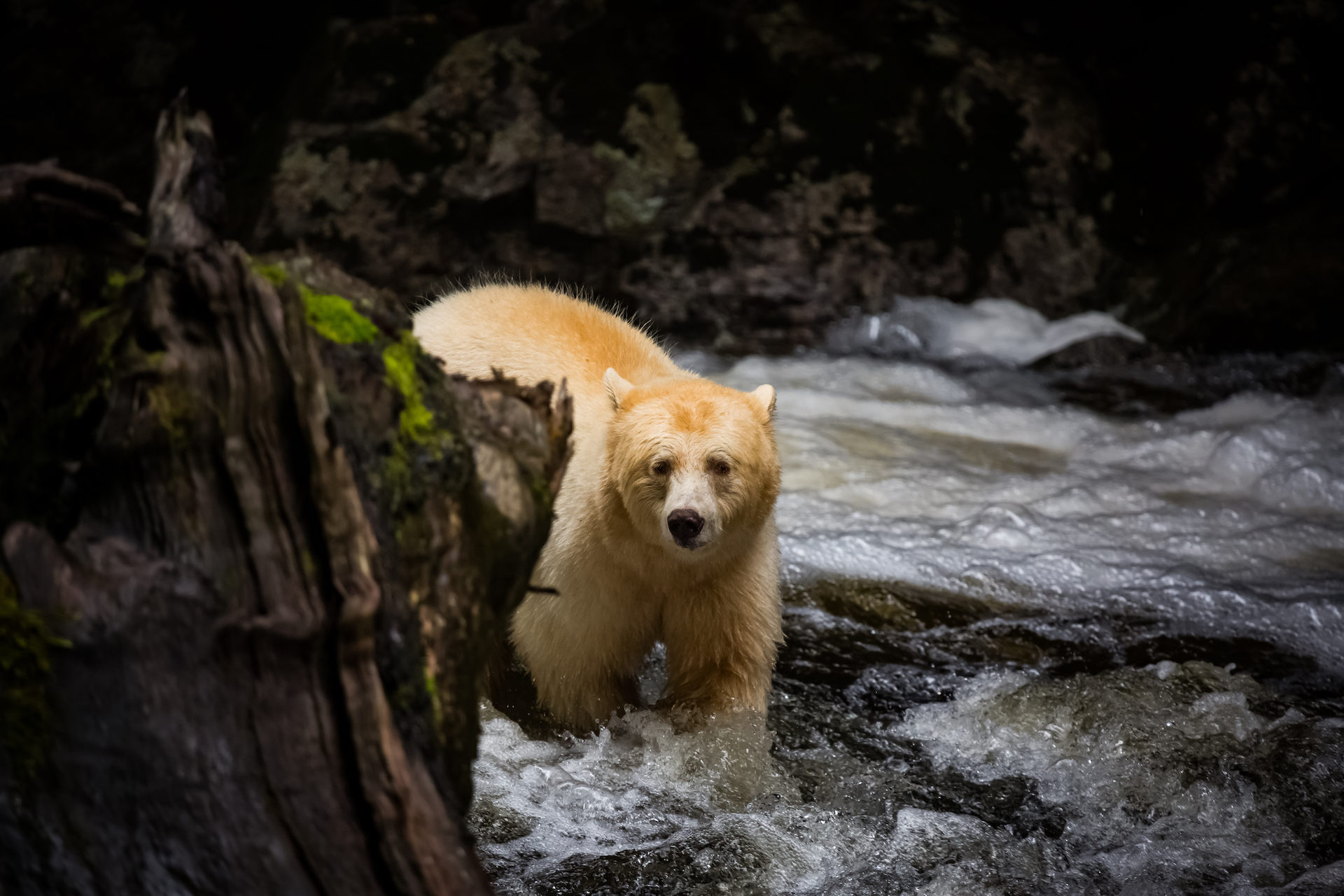 The Great Bear Rainforest covers much of central coastal BC, from north of the sunshine coast up to Prince Rupert on the mainland. The density and difficulty of access to the forest has been part of its saving grace – there are no roads into the rainforest and only a handful of small towns dotted around its edge.

The rainforest is most famous for its unique climate, and the incredible diversity of wildlife that it protects, including the world’s rarest bear: The Kermode, or Spirit Bear. You can help contribute to the conservation of this precious and important rainforest and support local indigenous culture with a stay at the very special Nimmo Bay, a gateway to this spectacular forest.

Nestled away on the remote Islands of Haida Gwaii off the coast of mainland British Columbia, Gwaii Haanas occupies the southern tip of the islands and is one of BC’s most remote and untouched national parks. Haida Gwaii has been called the edge of the world, and the analogy is not too far removed from the truth. 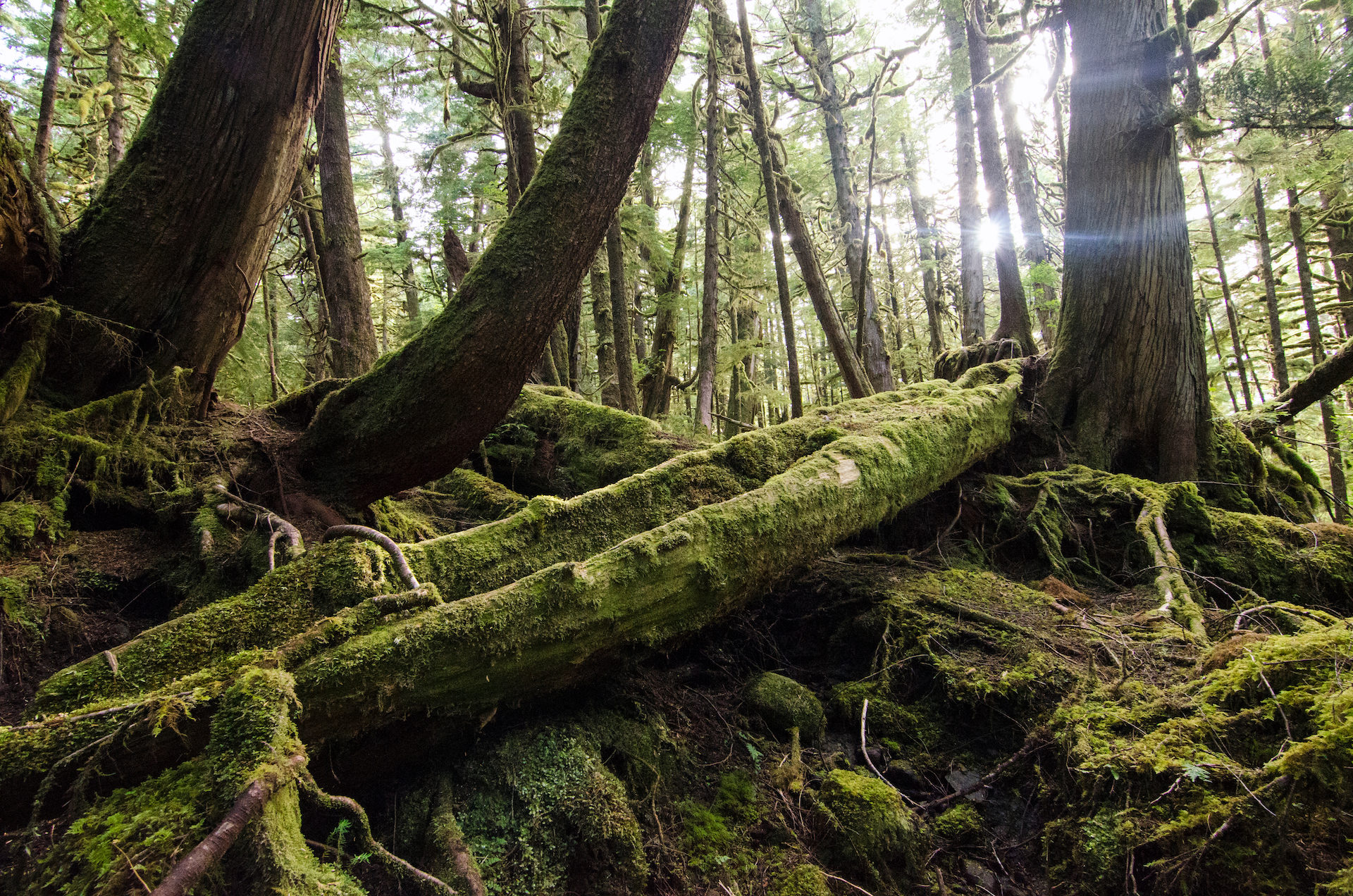 This moss covered canoe is hidden in the rainforest of Haida Gwaii, an archipelago off the furthest west coast of Canada.

Exploration here is only possible by floatplane or by boat as there are no roads leading into the national park. Gwaii Haanas means “islands of beauty” in the local Haida language, and the park lives up to its name. The natural features of the park include thousands of lakes, fjords, mountains, and temperate rainforest in addition to the biodiversity.

Marine life found here includes orcas, migrating grey whales, sea lions and porpoises. There are huge seabird breeding colonies, and the islands are an important stop for other migrating birdlife, too.

The park is also home to Haida heritage sites such as Ninstints or S’Gang Gwaii where former Haida village can be seen slowly blending into the rainforest with time.

Just a forty five minute drive out of Victoria, on Vancouver Island, Sooke is a beautiful spot to take in some of Vancouver Island’s rugged coastline and explore East Sooke Regional Park. There are over 50 kilometers of trails for hiking through the forest, plus a more challenging coastal trail, too. 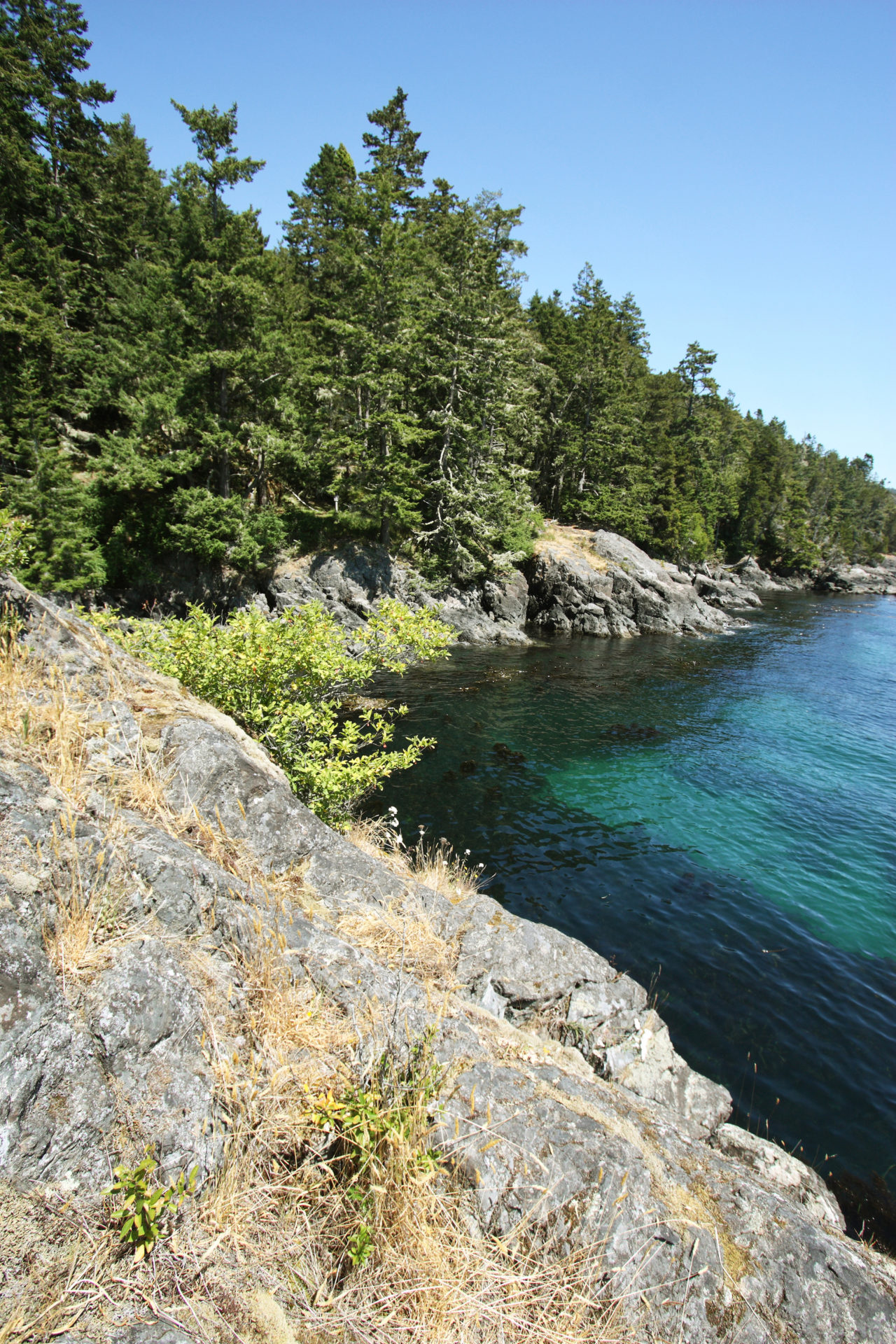 Or, you can head inland to the Sooke Potholes provincial park, where there are many more hiking trails, where the Sooke River snakes through a series of pools in the rock that were formed in the ice age. There are several viewpoints down onto the potholes, or in summer cool down by jumping in to the fresh water.

Located near Prince George along the upper Fraser River Valley in Central British Columbia, the Ancient Forest is an accessible place to experience the beauty of BC’s wet, temperate rainforest. Boardwalks are laid out, making it easy to soak in the the power of the looming cedar trees, while taking a more leisurely stroll. 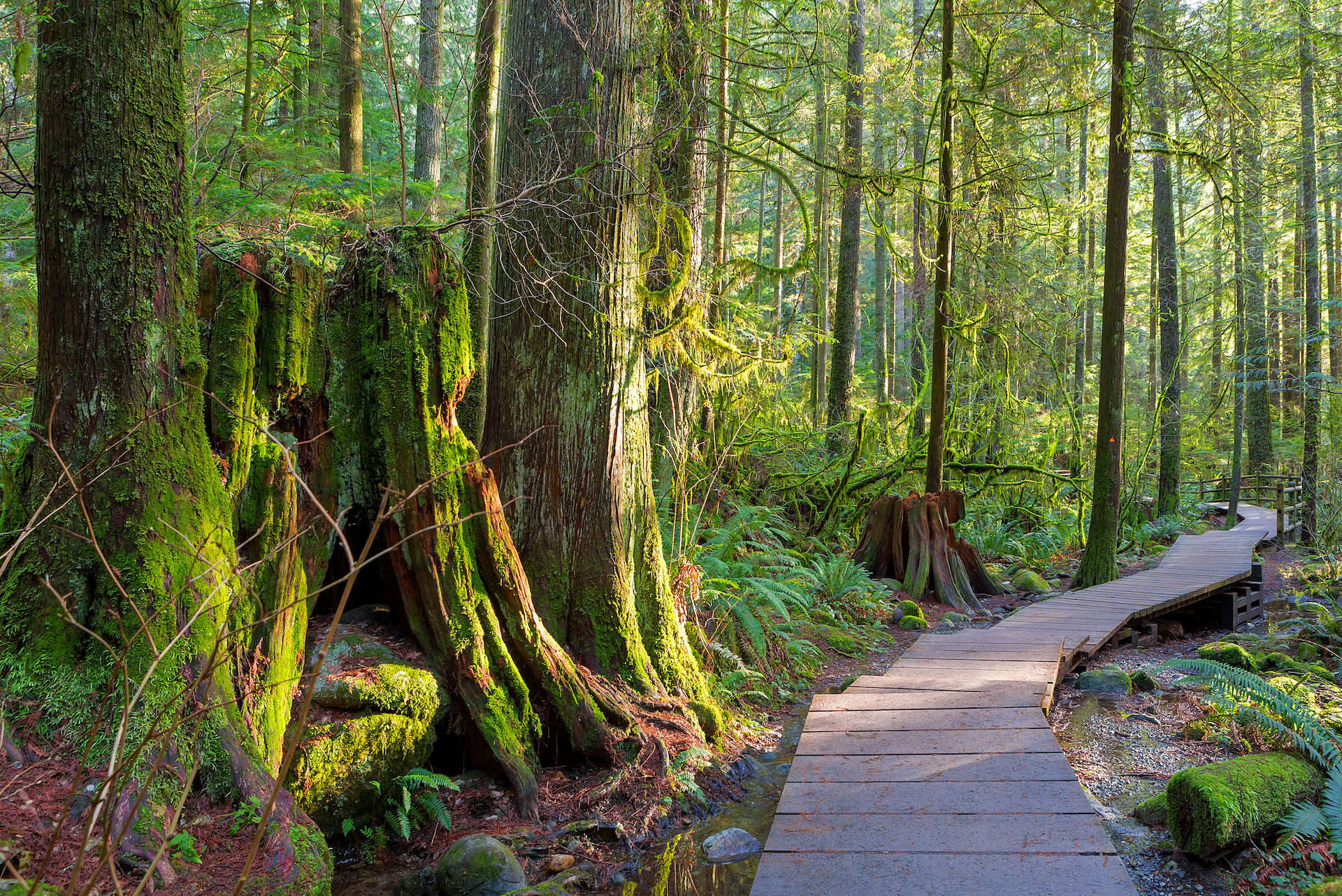 Beyond the boardwalk (which was set up by a local conservation initiative in a bid to make the forest open for all to appreciate), there are easy to moderate hiking trails through the forest.

There are plans to make this forest, which is named Chun T’oh Wudujut in the local indigenous language, a world heritage site, but for now it’s still one of British Columbia’s better kept “secrets”.

Back on Vancouver Island, Cathedral Grove is a popular spot to take in the majesty of the Red Cedar and Douglas Fir trees in MacMilllan provincial park. The oldest tree here is 800 years old. 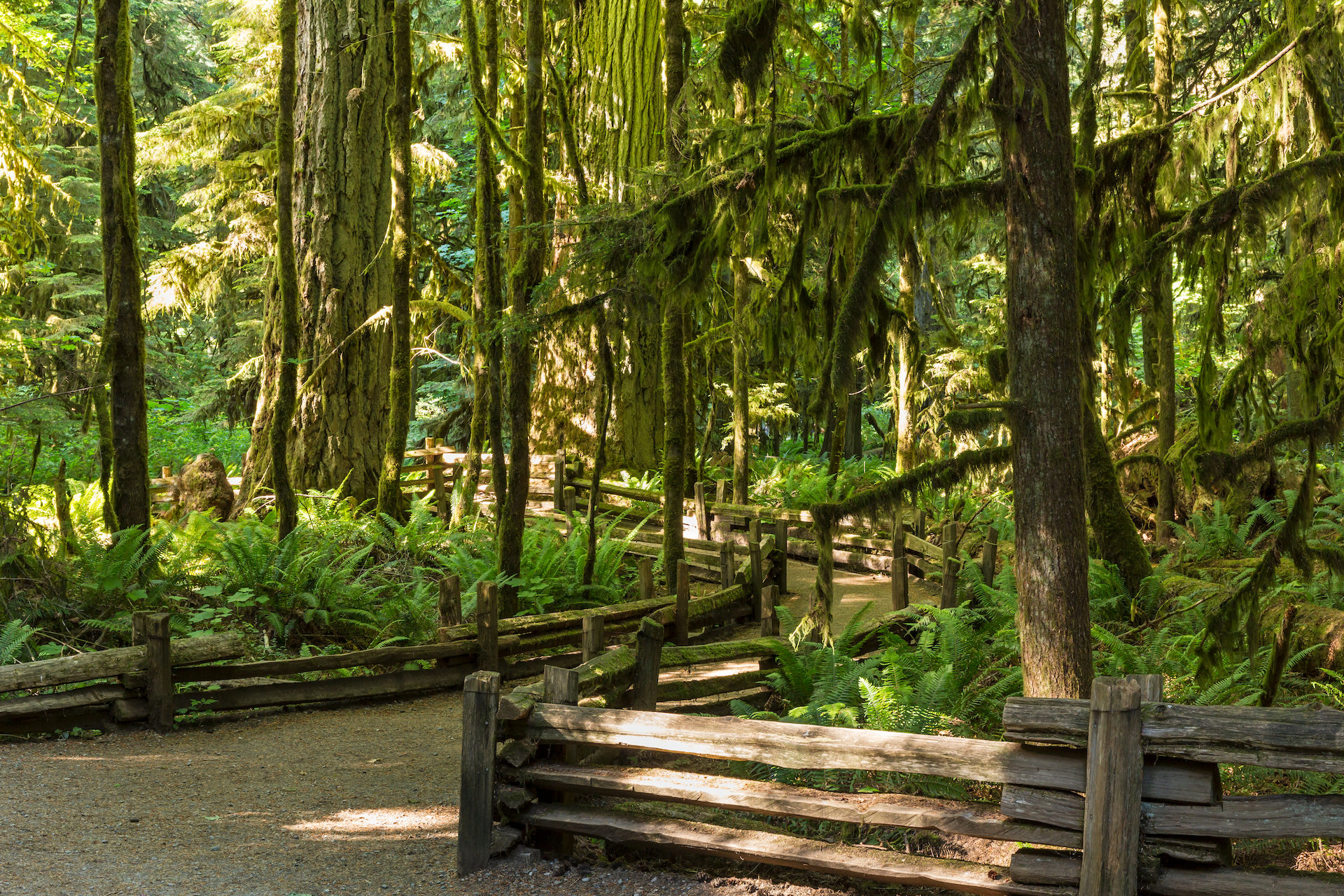 So named because of the way the light falls and lights up the trees, Cathedral Grove is a spot for all to enjoy feeling small next to the mighty trees. Once you’ve tried (and failed) to wrap your arms around one of the mighty trees here, there are plenty of hiking trails within MacMillan provincial park to enjoy with fewer visitors than those that make it to Cathedral Grove.

Cathedral Grove is located about thirty minutes’ drive from Parksville, a small city on Vancouver Island that’s home to some of the best beaches in the area as well as family run resort Tigh Na Mara, which has some handy electric charging stations if you’ve rented a hybrid or electric car!

Awareness and Planning
Change Location
Find awesome listings near you!